Video: Why it’s worth adding to your marketing strategy and how to include it [with examples]

Ever wondered if you should be including video in your marketing strategy?

Does video help you get more leads and sales?

Is watching videos what your audience wants?

Where do you start with adding video to your marketing strategy?

Where would you put videos once you’ve created them?

In this Blog, I’m going to be sharing with you the latest data, research and studies about video and using it to promote your business so you can get more leads and clients, what happens to the brain when we watch video v reading text, why it’s worth considering adding video to your marketing strategy and some fun ideas of how to use video as part of your marketing strategy.

How much video is being consumed online?

In 2019 Marketing Charts did a study, and they found that the average person was watching 84 minutes online per day.

Now obviously that was done in 2019 and that number is continually going up.

In a study by Statista, published August 2021, the data shows: 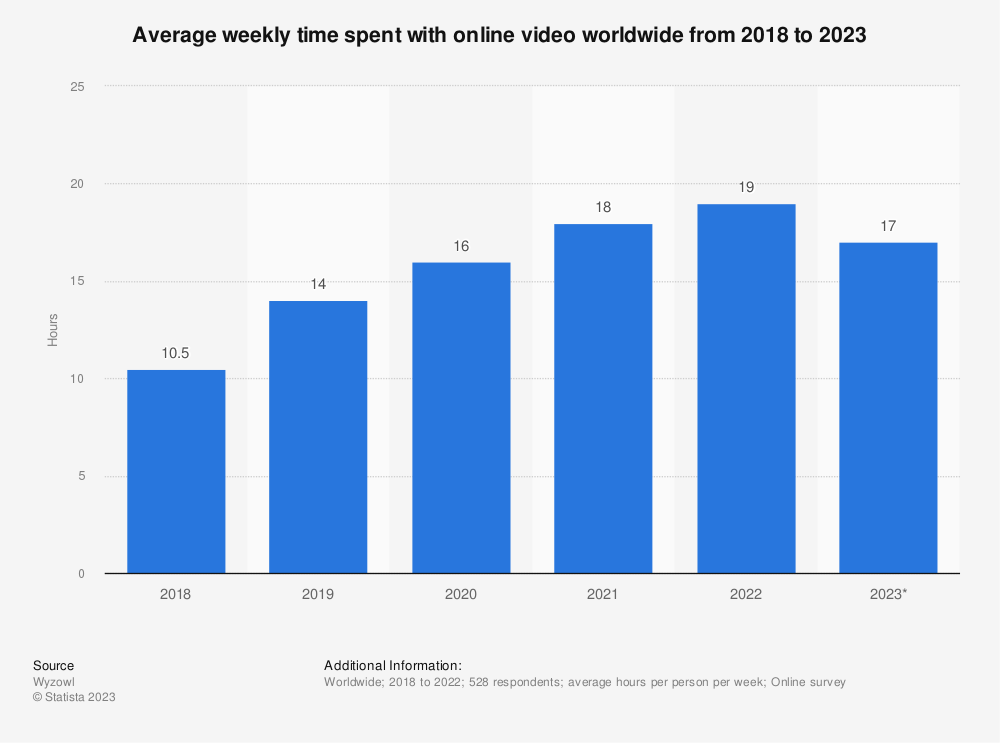 How important is video to a marketing strategy?

Well the guys at Hubspot wanted to find out. They spoke to marketers 92% of them said yes video is an integral part of their marketing strategy moving forward.

What about including video in emails?

Yep there’s been research done on that too.

The clever people at Brain Shark did some research all around video within emails and they discovered that just by putting the word video in the subject line boosted open rates by 19% and when it came to making more sales from emails using video, they found that companies closed more sales when they used video in their emails.

The data showed that 36.9% more sales were achieved when videos were included to close sales.

Companies discovered personalized emails had a higher retention rate than those that weren’t personalized.

35% more were watched and retained than those that weren’t personalized.

Research done by Wyzowl, when they spoke to marketers 80% confirmed that video had led to an increase in sales.

What happens in the brain when a video is watched v reading text only?

All this data is all good and well,  but we know when it comes to marketing we are actually marketing to human beings, people like you and people like me, so what actually happens in their brain when they watch a video compared to when they read text?

Let’s look at the details of a study run by a company called Vidyard.

Vidyard are a video company. They create software that enables you to quickly do a video from your desktop and send it directly in an email so yes they’ve got a vested interest, but their study went into quite good depth and a lot of analysis so if you want to read that full study You can here.

Don’t have time and want the good bits?

I’m going to take all the good bits and share them with you.

What they discovered was that video does good things to the brain.

Not only does it do good stuff to the brain, it also made the people who watched the videos as part of an email feel happier.

Which is important for marketing.

All interesting stuff right it’s all really good so far.

How many people took part and how did they measure their reactions?

They had 39 business people as part of their study, and what they did was attached sensors to see what was going on in their brain, their skin (to see if here was a change in  temperature, if they got excited or sad) and also their eyes so they could see where their eyes were tracking.

There were two parts to their study to see how people responded to text and video within the emails.

In the first study the participants were shown an inbox with seven emails.

What happened was when they got to the video in the email?

Everything started to light up.

Their brain really enjoyed it, they were happier.

Their eyes were focusing better on the content  and all in all the response was good.

When they finished watching the video, closed the email they went back into the text only email.

All the responses went back to being pretty neutral and pretty flat.

What information had a better retention rate? Video or text?

Why should you consider using video in your marketing strategy?

Here’s a few reasons why I think it’s worth considering.

There are more people watching video and it looks like this is going to increase.

What types of videos are people watching?

These are the types of videos that people are specifically looking for.

Video testimonials: These videos go a long way to help build know like and trust because video gives us that face to face interaction and engagement.

Video triggers more of the emotional responses that you want from your audience.

48% (nearly half of consumers) wanted to watch videos around information and content they were specifically interested in.

When it comes to thinking about what audiences want, Wise Owl spoke to marketers and 95% of them had said that video had helped give consumers the information that they wanted around products or services.

Why is video so powerful at building trust with your audience?

Even though we’re online we still want to connect with other human beings and make that emotional connection.

Seeing faces humanises the company or your business.

Which is what consumers want.

As Mark Schaefer says, ‘The most human company wins.’

It would appear that video is good for your website.

87% of marketers give video the credit for boosting traffic and visitors to their websites and incorporating video on a landing page has seen a conversion rate increase by over 80%.

Where would you put videos as part of your marketing strategy?

If you use video in your marketing strategy, where would you put them?

According to the data, your website is an obvious place to start experimenting with video.

Whether it’s your home page, you’re about page, your products and services page, adding video testimonials and case studies seems to be the way to go.

Is it worth including video in your emails?

What about using video in your emails?

You could you mix things up a little bit and include some personalised emails.

Even within your sales strategy and your marketing strategy as well.

Should you use video in your social media?

Will video work on social media?

You don’t need lots of tech either.

Mobile phones now have pretty good cameras and it’s easy enough to upload and share wherever you want.

How to include video as part of your marketing strategy?

What are some of the small ways that you can start to introduce video as part of your marketing strategy?

The last thing you want to do is go all guns blazing and see video as the brand new shiny object to solve your marketing issues, if you have them.

Think about video strategically and sensibly for your business so some of the ways that you can start to use video are in a small way, but also having fun with it as well

When people make connections with you on social media, pop a little video to say ‘Hello!’  to them so it’s personalised.  It’s specifically done for them.

When you offer a lead magnet, when you follow up include a little welcome video in your email to them rather than just text.

Ask for video testimonials from your clients, and then you can pop them on your website and also share them on social media as well.

You could include a short video about you what you do and the products and the services that you offer.

I’d love to hear how you are thinking about using video in your marketing if you’ve got any questions or comments, please feel free to pop them below.

Do you want more marketing tips like these to land gracefully into your inbox every Monday morning?

Get my Monday Morning Marketing Memo. You get actionable marketing tips and advice to improve your online presence so you can get more leads and clients, what I’ve found to be super-duper useful – everything from books, Blogs, podcasts and software and I also pull back the curtain on my warts and all adventures as a business owner. After all it’s not all tea, biscuits and Homes Under The Hammer, and you can expect a fair few giggles along the way.

Are you at the stage you have no idea what to do next to get your marketing to work?

This marketing audit checklist will help you look at your website and social media through fresh eyes so when it comes to getting more eyeballs on your business, you’ll be raring to go.

You have Successfully Subscribed!

FREE Marketing Audit Checklist: How to get more eyeballs on your business